Here is a painted version of Without the wolf… with text by David Robinson.

Sometimes I find it necessary to create something, visually.  And I shed the “oughts” (that I “ought” to be doing this or “ought” to be doing that) long enough to satisfy my creative soul.  Tonight I am influenced by my mom’s brilliant quilterly proclivities and my dear friend David’s wise words. 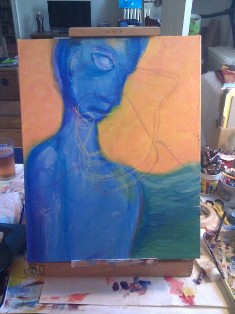 Sometimes a painting is just never really going to work out “as is” so you have to change the direction completely.  I knew that was going to be true of this one, so I took a trio of photos of the process.  (Clearly, I am influenced right now with the play that I am directing, Wittenberg, set in 1517 Germany.)

Originally published as the CODA in TYA Today, Fall 2008

Hockey is better than theater for young audiences.  More specifically, seeing hockey is more exciting than seeing theatre.
It’s not that I don’t love theatre. I do. But I also love hockey.  And I often wish that the best parts of hockey were present in every TYA production.
It’s not the fighting that I love.  It’s the speed, the skill, the competitive drive of the players and the unbridled enthusiasm emanating from the fans that excites me every time I go to a hockey game.  I want to feel the same excitement about every TYA production I attend.
I want to root for my team.
I want to see a hero emerge.
I want to experience the game, not to sit idly by.
I want to feel that my presence really makes a difference, that my cheering can truly fuel the players on the ice.

If TYA were more like hockey, I would show up to every production with the intuitive knowledge and the faith that something magical, unbelievable even, could and probably would happen tonight not because I think it but because we all think it.  As Martha Mountain, a gifted lighting designer, wrote, “That shared adrenaline high is an amazing thing, fearsome even. The crowd at a game ALWAYS remembers that it is part of a shared experience.” Even when the my New York Rangers (and because I am a fan I can call them mine) were in their doldrums, we showed up at games knowing that tonight could be the night that all could change and that if we believed, like Tinkerbelle and so much clapping, truly believed, we could turn this team around.  It’s why the announcers at Madison Square Garden refer to us, the fans, as “the Garden faithful.”

If TYA were more like hockey, we would be updating our “Fantasy TYA Teams” every day—trading characters, checking stats, ensuring that our team was stocked with only All Stars (see Illustration A).  If TYA were more like hockey, I would buy the Media Guide at the start of every year to learn more about the characters appearing in the upcoming season—their stats, their personal background, their country of origin, the other plays in which they appear, where they spend their time when they are not appearing in plays.

If TYA were more like hockey, I would high-five total strangers with unabashed joy during highpoints of the performance.  I wouldn’t be afraid to talk with total strangers about the performance during intermission, even when we are standing side by side at the urinals.  I would overhear heated, healthy and non-violent arguments in the house about who the league’s MVP should be this season—perhaps that Seattle’s Hamlet really is going to come through in the second half, or that Wilbur is really underperforming this year.

If TYA were more like hockey, we would boo the character that hurt another.  We would cheer the character who selflessly assisted another so that the superobjective could be achieved.  And at the end of a great show, the fans would cheer the players but the players would also cheer the fans, just as the New York Rangers skate to center ice at the end of every home win and lift their sticks as a salute to their Garden Faithful.

Brian Leetch, one of the Rangers all-time greats, told the New York Times as he retired that he loved playing hockey because of its team camaraderie. “I never felt the need to be singled out when things went well,” he said. “I never wanted to be singled out when they went bad.”  I feel the same way.  I’ve played badly and I’ve played well.  So have you. But it’s not about you and it’s not about me.  Theater for young audiences is a team sport.  Let’s get out there and play every game like it’s the playoffs.  The fans deserve it.

See you on the ice.

David A. Miller is a director, playwright and educator.  One day he will teach the university course “The Player on the Ice and the Player on the Stage: Actor and Audience in Hockey and Theater”. www.mrdavidamiller.com

I had the pleasure of making it to the Whitney Museum on Friday, the final weekend of the Charles LeDray exhibit “WORKWORKWORKWORKWORK”.  It was pretty incredible how deeply I could be involved in these pieces, mini-installations on small, detailed clothes and thousands of miniature vases…  As the prologue to the exhibit read: “Simply said, everything is the scale it needs to be.”

Although its hard to relate the entire experience of seeing the exhibit, there were a couple of pieces in particular that were moving to me.  First, “Hole”.  A miniature shirt, tie, suit jacket, hanging on a wooden hanger.  But with a hole cut through the chest of the whole ensemble.  There was something so eerily absent from the chest of this small figure, but also so focusing: what was it that you could see when you peered into the heart (or, the space where that heart would be) in this small space?

(For a sense of the scale, an image of the piece at right and the image of a person viewing another piece in the exhibit– “Men’s Suits”– that includes jackets of the same size/scale.)

The other piece that I could not seem to walk away from was “Dispatch (#1), 1992”.  At first glance the stack of doll house scale chairs, dressers, tables, outhouse door, etc. are almost whimsical.  But it seemed that there was something more.  As I examined more the small tower more closely I saw that each piece in the mountain was quite elegant and that they were so delicately balanced — they had a collective fragile quality to them.  Then I read the placard and the materials list gave me a new perspective: “Human bone and paper”.   Something was altogether new in the piece.  I then stood near the piece for quite some time.  At first I was marveling at the beauty and the meaning, then I was sticking around just to see other patron reactions to the placard.   They did as I did.  As soon as they read the placard they were compelled to look again, with a new perspective.

This week we rehearsed our outdoor production of The Book of Liz outdoors in the park on the 5th Avenue side of the Old Stone House.

On Tuesday the actors had the challenge of maintaining focus and composure (which they did with aplomb) while a funk and soul band played, loudly and well amplified, across the street.  After that experience they were prepared to deal with anything that might come their way.  Any type of interference.

On Thursday we rehearsed again outside, but this time there was no funk band.  There were, however, many “audience members” for us, ranging from the casual passersby to the earnestly focused on the performance.  My favorite audience members were the young people who stopped and stayed, incredibly focused on the actors at work.  By Scene Five there was a trio of girls who were not only watching but slowly moving closer to the “stage” (which was chalked out on the ground) and, incidentally, directly in front of me as I watched the run through and took notes.  I did not move them out of my field of vision because my view was not as important as encouraging their interest in live performance (or not discouraging it at least).

There were several highlights from the rehearsal once the girls were there.  There were many moments when the actors changed the expletives in the play to more family friendly, or at least vague, terms (b-hole, jerk, goo, slag replaced the usual suspects).  But my favorite moment, captured in the photo above, was when Yvone is pointing out to Liz one of the fishes in the fish tank (located in the imaginary 4th wall, in the direction of the audience).  At that moment the girls were so engrossed in the truthful storytelling of the actors that they turned behind them to see the (imaginary, nonexistent) fish tank.

I love the draw of  live performance.  I love the power of the theatrical imagination.

Many people have asked me, “What is The Book of Liz?”  My answer has become, “It’s a play about cheese balls.”  I then

receive quizzical looks.  I then add, “It’s by Amy Sedaris and David Sedaris.”  And in response I often get a knowing, smirk of a grin.  Those who love these siblings are quite fond of the unique Sedaris voice that blends dry humor, quick wit, and satirical observation.

Fueling that great humor is great heart.  After the rolls of laughter that regularly occur from encountering a Sedaris play or piece of writing (or interview, for that matter), there is something that stays with us, the nearly inexplicable quality that defines great comedy.  As George Meredith wrote in An Essay on Comedy, “The test of true comedy is that it awakens thoughtful laughter.”  The Sedaris siblings’ brand of comedy passes that test.

The many characters of the Sedaris siblings’ creations are deeply flawed (or “but flawed” as Reverend Tollhouse says).  But despite the many foibles of each character (including themselves in the case of David’s writings), there is a universal emotional core which allows us to laugh with them rather than at them.  At the core of the title character in The Book of Liz is the need to feel appreciated.   She asks Sister Butterworth and, in effect, asks us: “Do you ever get the feeling that you’re not being appreciated?”  Liz must find her answers and we are prompted to find our own, thoughtfully.  The play, after all, is about much more than cheese balls.

The Book of Liz by The Talent Family, Amy Sedaris and David Sedaris performs July 10, 11, 17, 18, 24 & 25 outdoors at the Old Stone House, Park Slope Brooklyn.  For directions and more information, visit The Book of Liz Website.

I am grateful for the many creative projects I have going at any given time.  And I am grateful for those in which I see a real change in my fellow artists through the outstanding work that they do.   In one recent case I saw such a change.  It just so happened that my fellow artists were 7th graders at Our Lady of Mt. Carmel-Benedicta in the Port Richmond neighborhood of Staten Island.

Inspired by the production of Beauty and the Beast at Wagner College and the classroom curriculum on Greek myths, student artists, in small groups, over the course of 4 sessions, created characters from inanimate objects — a tube of paint, a paintbrush, a ladle, a water bottle, a box of couscous — through biographies, monologues and costume renderings. 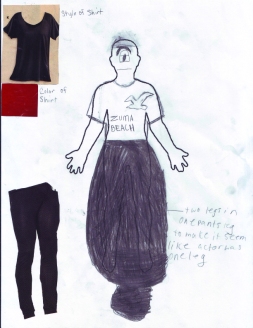